Every single U.S. citizen is entitled to receive all Medicare benefits. They should be 65 years of age or over to apply for it. You should take some time and start gathering information in the right order.

You should remember that the Federal and State Governments are working together to keep pace with the changing times.

The historic moment came when Congress passed Medicare in 1965. The official reports suggest that only half of the senior citizens were insured before that. Congress took another big step seven years later when young people who were suffering from disability or Chronic Kidney Disease (CKD) were also included in the list. Then came another significant moment when young people suffering from Amyotrophic Lateral Sclerosis (ALS) were included in Medicare (2001).

Medicare Part C and Part D were added under the Balanced Budget Act (1997) and Medicare Modernization Act (2003) respectively. There was just Part A and Part B included during the initial stages.

The collective amount helps the concerned authorities to run the operations successfully. It also becomes clear that why there is no premium for Part A. You would be asked to pay a monthly premium, in case you have not paid taxes for at least ten years. 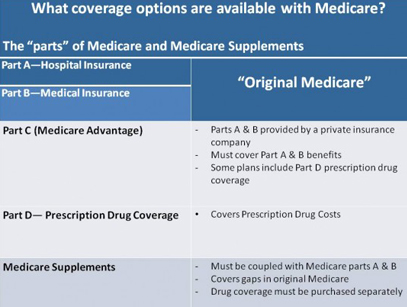 There are four different parts to it.

You can stay at a skilled nursing home for a period of 100 days. It is applied whenever you fall ill to a different health problem. It would pay for the first 20 days in total.

A person who has already spent few days in the hospital has another opportunity to receive the benefits within the same calendar year. He or she must be able to maintain a gap of minimum of 60-days from the day when they last visited the hospital. The 100-day cycle would begin again for them. People who stay at hospitals for more than once in a year would end-up taking maximum benefits out of their Part A plan than others.

2. Medicare Part B (Medical Insurance): Part B has a fixed monthly premium to be paid.

There are penalty charges for not being involved or enrolling oneself in Part B plans. You should not delay the process thinking that you are saving some money by not doing it. It has turned out to be the opposite. There is nothing good about not doing it.

It also provides mobility scooter and wheelchairs to patients who need it.

You can save a lot of extra money by taking the right decisions now.

These plans have been further classified into five sections: 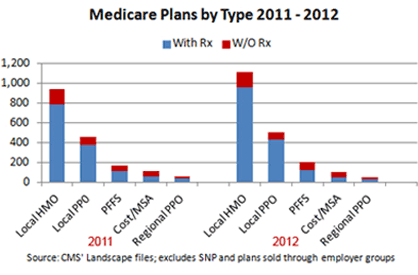 All the above-mentioned plans provide extra benefits and services to the beneficiaries.

The good part is that the amount of savings made (or generated) by Medicare Advantage Plans may be shared together with the policyholders. It helps you to have an affordable health care system in place.

You can expect a better coordination level as different units are working together to achieve the same goal. There are several preventive measures undertaken to detect the health issues at an early stage. It offers the best return-on-investment (ROI) percentage.

4. Part D (Medicare Prescription Drugs): Prescription Drugs are bought as a stand-alone insurance plan. Private insurance companies design the plans taking different factors into account. These plans are approved by Medicare however the coverage aspect is not regulated (as is the case with Part A and Part B).

There have been several positive changes made since the beginning. The sole objective is to provide better services and benefits to the beneficiaries. The inclusion of Advantage Plans and Supplement Plans has kept the momentum on. You should look at the prospect of investing or buying an insurance plan like any other asset built over a period of lifetime.