Medicare, a social national insurance program was initiated by the State Law. They guarantee Insurance coverage to almost 58 million Americans annually. They tend to provide life coverage at affordable rates unlike the private insurance companies.

All insurance plans have a defined set of benefits. Medicare is serving a large populace of sick, old and low income Americans who are not in a position to afford it. Medicare insurance plan caps 48 percent of health care costs and the rest of the cost to be taken care by the enrollees.

Original Medicare consists of Part A and Part B, responsible for covering hospital care expenses and medical care expenses respectively. They do offer a choice between single payer plan, that is an open network plan covering Part A and B and the network plan, known as Medicare Advantage Plan, where the government pays only for the private health coverage and the rest of cost is borne by the beneficiary. 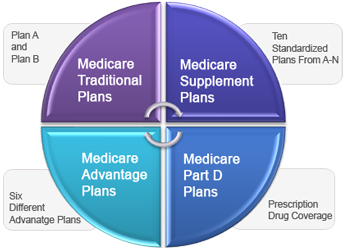 All the benefits are based out of the medical necessity and depending on the cost that the enrollee is willing to pay. Each category has been defined as below:

Basics of Medicare Insurance Part A and Part B:

Part A plans are mostly hospital based insurance plans that provide coverage for all the expenses related to hospitals and do not include any long term care. Most of them do not have to pay for it. The basic medical costs that are covered are:

Blood Transfusion:
They cover expenses for the blood needed during the treatment

Skilled Nursing:
These services are to be related with the diagnosis time during the stay at hospital. The coverage for this particular period is time bounded for 100 days. The first 20 days are covered fully by Medicare insurance plan Part A and rest 80 days are covered with an amount of co-pay to be paid by beneficiary.

Hospice Care:
These are designed for those who have a short span of life. It offers grief counseling, symptom controls drugs and other services. The care giver approved by Medicare visits home and takes care of the patient.

Part B plans are related to doctors, outpatient care and all those services which are not covered by Part A plans. They cover physical, preventive and occupational therapy services. They tend to aid in providing coverage to medically necessary services stated as below:

Medicare Advantage plans are also known as Part C plans. They combine the Part A and Part B insurance plans to create a plan that offers wide coverage. They consist of network of doctors, clinics and hospitals for receiving treatment and the beneficiary needs to make a choice from them.

Most of these plans also offer an insurance coverage even if the enrollee is out of town. There are certain special needs insurance plans that have been created for those who need special health care or are suffering from chronic diseases.

There are four types of Medicare Advantage Plan. They have been listed as: 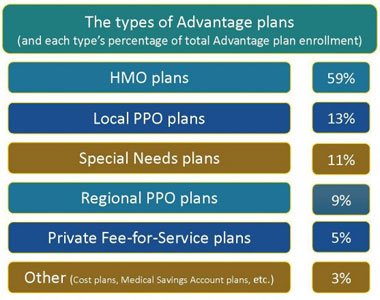 An Insight to Medicare Supplemental Plans:

Medicare Supplemental plans supplement the Original Medicare Plans. Unlike the normal insurance companies and their plans that keep on varying on the basis of cost and benefits offered, each state law has divided the supplement plans into ten standardized plans.

This makes it easier for the senior citizens of the society in hand picking the best insurance plan suiting their requirements. The coverage of the insurance plan selected would remain constant throughout the life span of the plan and one need not to worry about the coverage level that keep on changing every year. They get renewed on their own, till the amount of premium is paid on regular and timely basis. The best feature they offer is that one can choose doctor that they like and that accepts Medicare. The enrollees have no boundations of in network or out network doctors.

These plans have been divided into ten plans named from alphabets A to N. Each plan offers different benefits. Here’s an overview of all the ten standardized plans:

The basic benefits of Supplement Plan A are:

Being standardized, it does not make any difference from which company the plan is purchased, the insurance coverage offered would be same.

Medicare Part D plans are the plans that are dedicated solely to the insurance coverage against the prescription drugs, which often are skipped by Medicare Part A and Part B plans. They have been designed to aid people to lower the down the expenses for the prescription drugs. They provide protection for future expenses and have an easy access to medically necessary drugs.

There are two ways of getting enrolled in a Medicare Part D plan. One of them is to get enrolled in Medicare advantage plans like HMO or PPO that provides partial prescription drugs coverage and the second method is to have standalone Part D plan, depending on the drug requirements.

If one decides to enroll in Medicare Insurance Part D Plan along with the traditional one, then they would require paying a separate premium amount. If enrolling in advantage plans having an insurance coverage for drugs then the cost is already included in the overall premium. The plans that do not have drug coverage; they can be combined with Part D plans.

Those who cannot afford the cost of prescription drug coverage can qualify in the income and resource requirement criteria, for the extra help offered by Medicare. This feature helps in assisting one to pay for the additional costs incurred.

Part D insurance plan helps one in saving dollars on those huge prescription drug bills. One can choose the list of the drugs that one needs on the regular basis. The selection of plan or the tier depends on the basis of the residential location, drugs needed and the budget of the enrollee.

Before enrolling for Medicare Part D plans, one is advised to have a thorough check on all the drugs covered under each plan so that they actually serve the purpose for which they have been purchased. One can find the information online by using Formularies.

Thus, in a nutshell Medicare has a wide range of insurance coverage to offer to the senior citizenry.